Our approach is for the grapes from each vineyard and growing region to express their intrinsic character in the special wines we craft. Gentle handling, careful use of barrel and stainless steel fermentation, and proper oak aging enhance the natural characteristics of the fruit. A fourth generation California farmer, Tom earned a business degree from Stanford and spent the first part of his career as a management consultant at the San Francisco office of the prestigious global management firm McKinsey & Company. One project during this time was evaluating a small winery in the Russian River Valley called Rodney Strong Vineyards and, in a chance meeting, he was introduced to founder Rod Strong and winemaker Rick Sayre. Already developing an interest in wine, this encounter planted a seed that would grow into a lifelong passion. 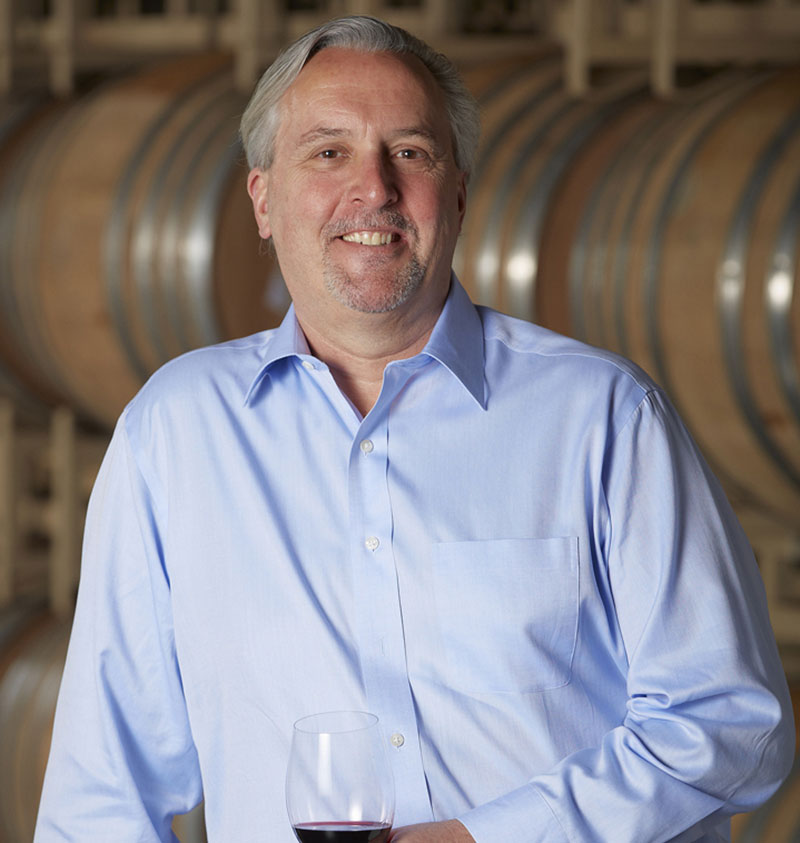 Carmen Castaldi serves as President of Rodney Strong Wine Estates, the iconic, family-owned Sonoma County wine company, which includes Rodney Strong Vineyards, Davis Bynum Winery, and 14 estate vineyards. He is a veteran of over 35 years in the wine business, with a passion for wine, people, and Sonoma County living.

Carmen began his wine career in 1980 working for a wine distributor in Asheville, North Carolina as an On Premise Sales Manager representing over 300 wineries. In 1986, he joined Beringer Blass Wine Estates working as a District Manager in the Chicago area. After being promoted to several sales positions in the Midwest, Carmen relocated to the Napa-based corporate headquarters in 2001 and assumed responsibility for North American Sales & Distributor Relations as Vice President. He was an integral part of the strategic leadership team that facilitated and led to the Fosters buyout of Beringer Blass in the year 2000.

Carmen joined the management team at Rodney Strong Vineyards in June, 2005 as Vice President, overseeing the sales and marketing operations. “I saw the move as an opportunity to join an extremely focused and successful sales and marketing team, and respected family owned winery. Additionally, Rodney Strong owner Tom Klein’s desire to position Sonoma County as a world-class wine region appealed to both my professional and personal aspirations,” Carmen states.

Over the past thirteen years Carmen has built and expanded a world class sales and marketing team to grow the successful Rodney Strong Estate, Reserve, and Symmetry programs. In addition to overseeing the acquisition of the Davis Bynum brand in 2007, Carmen has successfully launched over a dozen new wines, including the highly acclaimed, single vineyard Alexander’s Crown, Rockaway, and Brothers Cabernets as well as Rowen Wine Co. and Upshot. Carmen was promoted to President of Rodney Strong Wine Estates in March, 2016; adding Winemaking and Vineyards to his scope of responsibilities.

Carmen graduated from Warren Wilson College in Asheville, North Carolina in 1980 with a B.A. in Behavioral Sciences. Committed to community involvement, Carmen serves on the boards of the Sonoma County Vintners, Luther Burbank Center for the Arts, and at his college alma mater. He and his wife Perri live in Sonoma County on their small pinot noir vineyard in the heart of the Russian River Valley. Justin Seidenfeld serves as Winemaker for Rodney Strong Vineyards, the iconic Sonoma County Winery that was founded in 1959 by namesake Rod Strong. Justin’s winemaking career began in Sebastopol, California, where he was an intern at Iron Horse winery in 2005. He quickly rose from cellar hand to taking on winemaking responsibilities which led to a position in 2006 at the venerable Robert Mondavi Winery in the Napa Valley.

As a harvest enologist at Mondavi, Seidenfeld walked some of California’s premiere vineyards and gained a comprehensive understanding of quality land and viticulture. Continuing on to become an enologist, he took that experience into winemaking and supervised the winemaking of Estancia, Clos du Bois, Simi, and others within the Constellation portfolio. Additional responsibilities included overseeing small lot Cabernet Sauvignon and Pinot Noir winemaking.

Justin graduated from the University of California, Davis in 2006 with a B.S. in Viticulture & Enology. He lives in Santa Rosa with his wife Dena and daughters Madison, Lila and Reagan. Justin enjoys golfing, playing with his daughters and working on his home. As to his inspiration to a career in winemaking, Justin notes, “people recalling the occasions that wine makes better and memorable is the reason I make wine. Hearing about how and when someone enjoyed a wine I made inspires me.” As an Air Force brat, Greg moved around throughout his childhood. His family eventually settled down in Sacramento, where he spent his formative years. Greg’s love of nature led him the University of Wyoming where he earned a bachelor’s degree in Natural Sciences. After graduating and returning home, he considered his life’s many options. Initially turning away from dentistry and the Peace Corps, and fatefully moving to Sonoma County to join his girlfriend, now wife, Mary, he landed in Santa Rosa. Intriguingly, many local lab jobs were in the wine industry, a career path he hadn’t anticipated. Greg quickly landed a position at Vinquiry in 1999, working for renowned winemakers Marty Bannister and MaryAnn Graf, who owned Vinquiry at the time. Four years later, after a sleepless night thinking about his future, Greg left Vinquiry for the Enologist position at Chalk Hill Winery. Two years after that he left Chalk Hill to take a position at Rodney Strong. Since that fateful day, his position has progressed from QC Lab Manager to Associate Winemaker to Winemaker, and he is now winemaker for Davis Bynum Winery, and the Pinot Noir and Chardonnay wines for Rodney Strong.

Asked to describe his approach to winemaking, Greg responds, “Mostly low impact, with the thinking that 98% of the work is done in the vineyard and at fermentation.” That’s perhaps a more humble answer than an accurate one, but Greg had the rare fortune to work alongside and learn from three of the legendary winemakers in California history: Rick Sayre, David Ramey and Davis Bynum. What does one learn from such highly regarded winemakers? “From Rick,” Greg says,” I learned to be honest about the wine, but find the positive and lend a voice to that. From David I learned to relax, don’t be too reactionary. And from Davis, to be humble and real and avoid telling the bookkeepers the true story if you need to.” There’s wisdom in that for just about every occupation.

Greg lives in Santa Rosa with his wife Mary and their two children Lucas and Cora. He claims to be an amateur backyard birdwatcher because in the front yard, “You have to be careful where you point the binoculars.” An avid hiker and mountain biker, he hopes one day to hike the length of the Pacific Crest Trail from Mexico to Canada. That’s 2650 miles over about five months no matter where you point the binoculars. But from lab tech to winemaker for Rodney Strong Vineyards and Davis Bynum Winery, Greg is used to dreaming big. “My desire is to make wines that are elegant and timeless,” states Olivia Wright. This is a lofty goal, but one for which Olivia is perfectly suited. Spending a few summers in Bordeaux as a child put her on the right path, if not the Right Bank, but it was attending UC Davis that launched her winemaking career for good. A 2009 freshman year visit to Spain and a tour of the Frank Gehry-designed Marques de Riscal winery in Rioja, led to her personal wine “Ah ha!” moment—a taste of Riscal’s famed Baron de Chirel bottling. Elegant and timeless. Watchwords for any aspiring winemaker.

Olivia’s winemaking path led her to working harvests at Mumm Napa and Isabel Estate in New Zealand, but it was in the Central Coast, at Dierberg & Star Lane Vineyards, “where I really learned and fell in love with winemaking and winegrowing.” Winemaker Tyler Thomas, Olivia noticed, “showed up every day to the winery genuinely SO excited to ferment stuff.” To anyone who knows Olivia, it’s apparent she shares Thomas’ excitement at fermenting stuff—usually grapes, but let’s not tie her hands. At Rodney Strong Vineyards, as Winemaker, previously Assistant Winemaker, as well as Winemaker for the Knotty Vines brand, she now works alongside Director of Winemaking Justin Seidenfeld who “has definitely taken me under his wing and made sure I have opportunities to learn, grow, and have my voice heard.” With her talent and love of winemaking, one day it will be Olivia taking young winemakers under her wing.

Olivia has a passion for hiking, playing piano, show jumping, and a bit of kickboxing. But it’s wine that rules her passions, and her excitement to ferment stuff. “Half the fun of being in the wine industry,” she notes, “is that there is always something more to learn.” And the best part of being a winemaker? “Hands down,” Olivia says, “it’s getting to share the wines with family and friends.” Rick Sayre joined Rod Strong at the winery in 1979 as a talented young winemaker who had trained under the tutelage of legendary winemaker, André Tchelistcheff. Over the next four decades, Rick’s contributions would be instrumental in bringing worldwide acclaim to Rodney Strong Vineyards, as well as Sonoma County.

For all of his many accomplishments and contributions to our winery, Sayre holds the title of Winemaker Emeritus for Rodney Strong Wine Estates.

By clicking the button below, you are confirming that you are of legal drinking age.